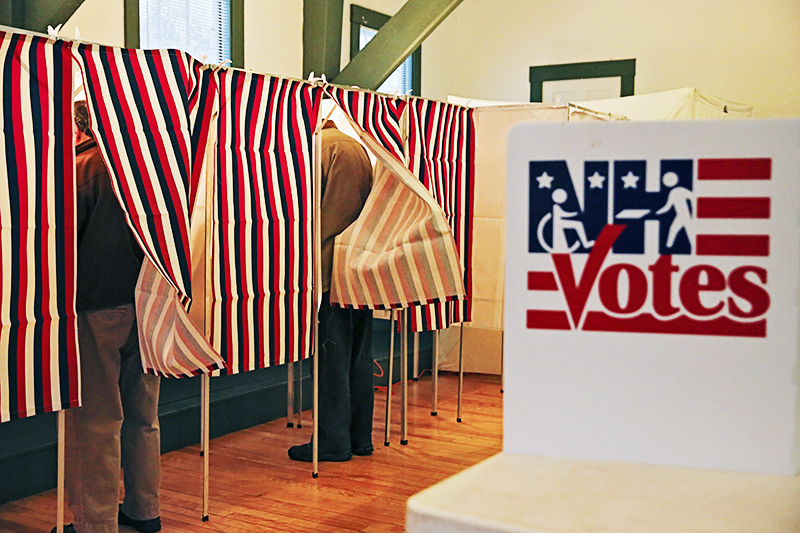 This term I am serving on the House Election Law committee, and oh, boy! Sparks sure do fly some days! Especially so as we dealt with SB 3, dubbed by some as “the voter suppression bill.”  Students, especially, are concerned. We listened to seven hours of public testimony—most in opposition—and held several work sessions, before voting to recommend it ought to pass along party lines—Republicans for, Democrats against.

Election Law is seen as one of the most partisan committees now-a-days, but it wasn’t always so. According to one long-serving representative, there were fewer bills to deal with in the past.  The goal of the committee then was to encourage voter participation by making the voting process as smooth and hassle-free as possible, while maintaining its integrity.  Both parties shared the goal, and bills were recommended to pass or fail with bipartisan support. As one former committee chair told us, “I served ten years on Election Law, we prided ourselves in being non-partisan. Less than 5% of votes were party line. Very few.”

But something changed.  And that change occurred right around 2006.

Students of NH history will recall 2006 as the election year Democrats won control of the House, Senate, Executive Council, and the Governorship for the first time since 1874. I imagine this came as quite a shock to the state’s Republican Party.

And in 2008, NH Democrats held their majority at the State House. Barack Obama was elected President, and we elected Democrats Jeanne Shaheen, Paul Hodes, and Carol Shea-Porter to Congress.

How could this even be possible in rock-solid Republican New Hampshire?

At first this shift was blamed on all those migrants from Taxachusetts, but a survey done by UNH at the time disproved that theory. The majority of our Massachusetts newcomers were Republican, and they settled mostly in the southern part of the state. It was the smaller towns upstate that seemed to be turning blue. (Indeed, that still seems to be holding true today. State representatives from most of the towns along our southern border—Hudson, Pelham, Derry, Londonderry, for example—are Republicans, and the GOP candidates for higher offices also do well there.)

So, if newcomers weren’t the reason the state turned blue, then it must be something else. In the eyes of many, there was no way Democrats could have won unless there was something shady going on. There must be voter fraud—massive voter fraud.  And oh, of course, all those students voting.

It’s interesting to note Secretary of State Gardener has said he first heard mention of those phantom “busloads of voters from Massachusetts” in 2006.

It’s important to note here that study after study has shown there is no evidence that in-person voter fraud is going on in NH—the most recent coming out of Dartmouth a few months ago. And even in these days of cell-phone cameras, there is not one photograph of a bus from Massachusetts unloading fraudulent voters at New Hampshire polling places. No reports to the Secretary of State or the Attorney General either. And if Democrats are being shipped in to vote, why do all our southern border towns remain so solidly Republican?

None the less, the myths persist. Even the President believes them.

Politics being what it is, the Red Tide of 2010 brought the NH House and Senate back under Republican control, and Bill O’Brien became Speaker.  Himself a former Democrat from Massachusetts, he was determined to do something about this perceived voter fraud.  In 2011 he was caught on tape telling a Tea Party group he wanted to get rid of same day registration, and prevent students from voting here, because they were young and foolish and voted liberal.

Pretty much from then on, there has been a partisan divide on Election Law. Bill after bill is filed in an attempt to solve a problem that does not in fact exist.

To be honest, it is hard for either side to understand the others’ position.  Although my Republican colleagues admit voter fraud is not rampant, they still believe it is happening, and laws need to be tightened to prevent even the perceived threat from occurring. They say even a few illegal votes threatens the integrity of our elections. We Democrats, alert to court rulings striking down voter ID laws in Texas and North Carolina as discriminatory, fear voter suppression, especially for our most vulnerable citizens—the poor, the homeless, and the elderly. We say even a few people disenfranchised by our laws threatens the integrity of our democracy.

SB 3 is a long and complicated bill, but my objections to it are basically two.

First, the form new voters must complete to register at the polls is long, and wordy, and often times difficult to understand. It took my husband eight minutes to complete. Although he is a former high school civics teacher, there were terms he did not understand, and with which he needed help.  It seems like a literacy test. Using this form on Election Day will create longer lines, and make more work for our already over-worked poll workers. It may well discourage people from voting.

And second, if those registering to vote do not have with them the required pieces of paper proving they live where they say they live, they will be required to produce them within a certain time period.  If they fail to meet the deadline, government officials, either town or state, may show up at their door. They may be prosecuted and face a $5000 fine. All this, even if they did vote legally, and live where they said they live.  Having government agents knock on your door and ask to see your papers seems like a bad scene from an old black and white WWII movie. Not the America I know.

In all those long hours of testimony, there was not one municipal voting official who testified in favor, although many did in opposition. They understand the new requirements are not needed.